Diving with Whale Sharks - Everything You Should Know

Mysterious and majestic animals, whale sharks are the largest fish in the world. Harmless and elegant, they swim in the warm waters of our planet in search of tiny food. Let's find out a little more about these gentle giants.

Whale sharks are cartilaginous fish that belong to the group of elasmobranchs and have existed for millions of years. The name is derived from their size. In fact, in the past they were initially mistaken for whales. (Remember that real whales are mammals and not fish)

Whale sharks are the biggest fish in the world with a maximum recorded length of almost 65 feet (20 meters), the largest whale shark was measured at 12.5 meters, but very rarely can you see sharks so large. On average they are juveniles, from 13 to 26 feet (4 to 8 meters) long. Their head is flattened, they are carnivorous and they feed on zooplankton, small fish and fish eggs, which they filter by opening their mouth wide.

Do you know how you can calculate the length of a whale shark without touching it? Researchers use a technique called Laser Photogrammetry. The tools are an underwater camera and two parallel laser pointers fitted together at a set distance apart on a single support. Remaining at a safe distance from the fish, scientists have to point the two lasers at the body of the shark and take photos. Subsequently the distance between the two points highlighted by the laser will be analyzed with the help of software and mathematical formulas. This will, in turn, reveal the shark's length. 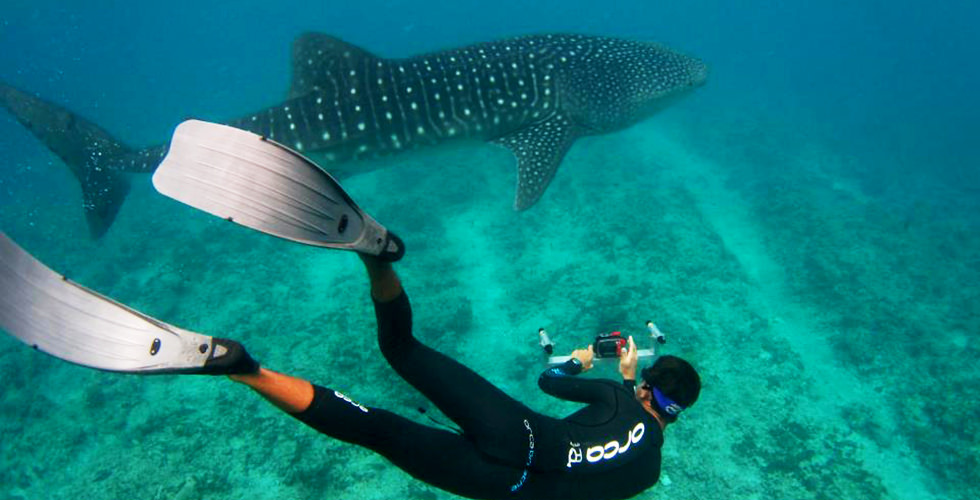 How to Approach a Whale Shark

Approaching these harmless and attractive creatures is not very complicated. Often they are indifferent to our presence and the temptation to touch or swim too close is very large. (I was very tempted too) But it’s important to follow the rules of conduct to avoid disturbing these gentle giants. The sharks will often bank and/or dive if snorkelers get too close, ending the encounter for everyone and causing the shark to show unnecessary avoidance behaviour.

Did you know that you can identify and distinguish each whale shark? If you look carefully, you will see that the body of this fish is covered by white or grey spots that are unique to each individual, just like our fingerprints. For photo-identification, it’s important to take photographs of a standard zone of the body. That is the part behind the gills and above the pectoral fin.

Where possible, try to photograph the left side. By taking a photo of this part of the shark, it is possible to analyze the spot pattern using software on the WhaleShark.org website (created in the beginning by NASA for the stars and then adapted to whale sharks).

This software can compare your photographs with other database images. In this way, you can create a shark story, establishing its range and in which periods it visits a specific location. This method is very effective as it is non-invasive, inexpensive and, as with manta rays, tourists can help by providing photos and/or videos to researchers. And if it’s a brand new shark, you can sponsor it and give a name to it!

MZ-667 is a shark on the WhaleShark.org database, he has been sponsored and nicknamed ‘Wesley’ by former Underwater Africa volunteer (the volunteer arm of the Marine Megafauna Foundation in Mozambique).

The Maldives Whale Shark Research Programme has even enabled tourists to identify the whale sharks they have swum with themselves using their new ‘Whale Shark Network Maldives’ mobile app. 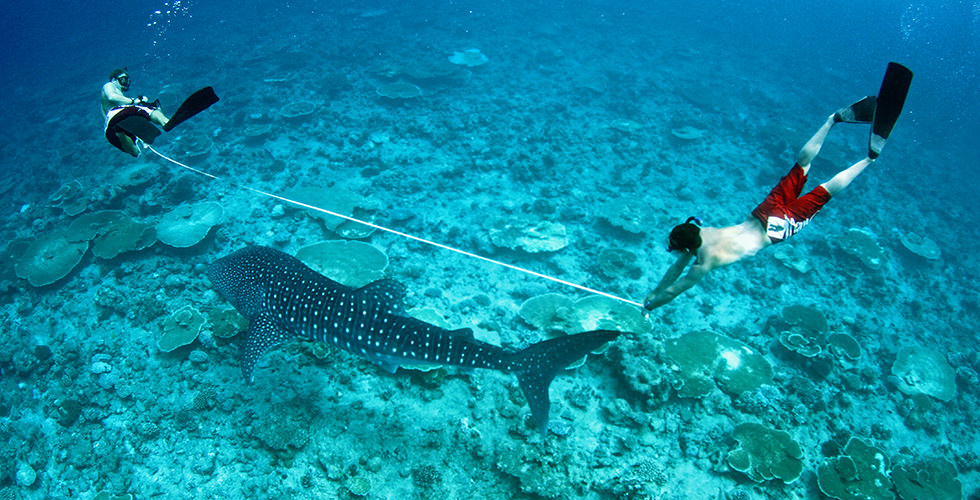 Being able to dive with whale sharks at night is an unforgettable experience. The strategy to attract them is the same that is used for manta rays. We stop in a place where the chance to see these sharks is very high, then we point large lights into the water and we wait. The light will attract plankton, which in turn will attract the whale sharks. The result is poetry. 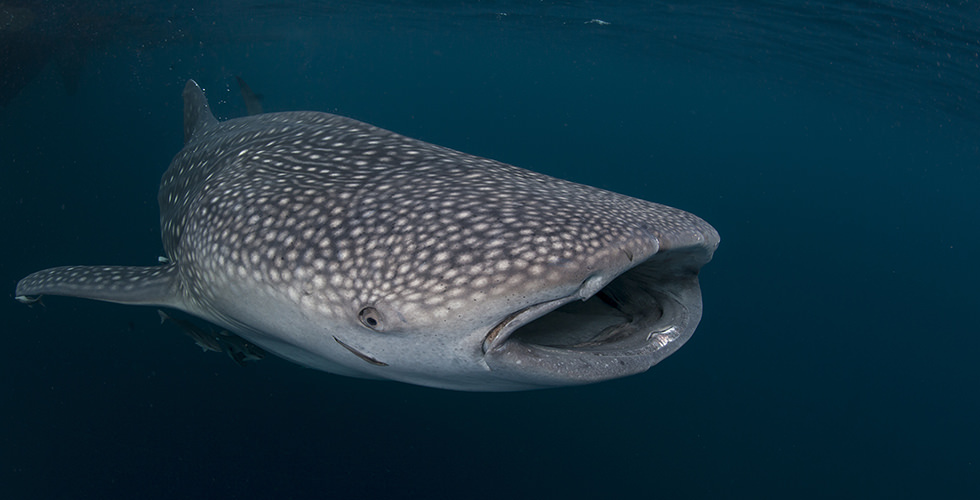 Whale sharks have few predators, because they are very large and difficult to attack. Attacks do occur when they are still small (juvenile stage) by aggressive sharks and other large predators. Only killer whales can be a hazard once whale sharks become adults.

Surely the greatest danger to these huge fish is humans. The cause of this danger is the trade of their meat, especially in Southeast Asia. In Taiwan, for example, until a few years ago, 10 tons of shark were sold at $21.400. Whale sharks are actually protected in Taiwan. They are however, not protected in China, where large scale fisheries are actively targeting whale sharks. Their fins are used for soups, especially in Hong Kong. Whale sharks are also hunted for their liver oil, which is used as a waterproofing treatment for wooden boats.

Bycatch is possibly their second biggest threat, where whale sharks aren’t the target species but the fish species on whose eggs they feed are – such as tuna and mackerel, which are fished on an industrial scale. Ship strikes are also a big threat – as with whales, whale sharks are often found near the surface of the water swimming slowly, and their biggest aggregations occur in areas of major shipping activity, such as Mexico and Qatar.

Furthermore, habitat destruction and excessive pollution can harm whale sharks and kill them. A big risk factor is the plastic that floats, which can be filtered accidentally during feeding and consequently cause the death of the whale shark.

In the last few years, the number of people who want to see and swim with whale sharks has increased. This type of tourism can be very positive, but should definitely be regulated. We must always remember that the most important thing is to respect and not to alter the biological cycle of these animals. If there are too many boats, these animals can be accidentally hit by propellers of the vessels. In the Maldives, 69% of whale sharks have injuries associated with boat strikes.

As a final note, giving food to these fish (shark feeding), to increase the chance of seeing them, is controversial, because it might alter their migrational behaviour.

For these reasons, responsible tourism managed by researchers and professionals is the only solution. 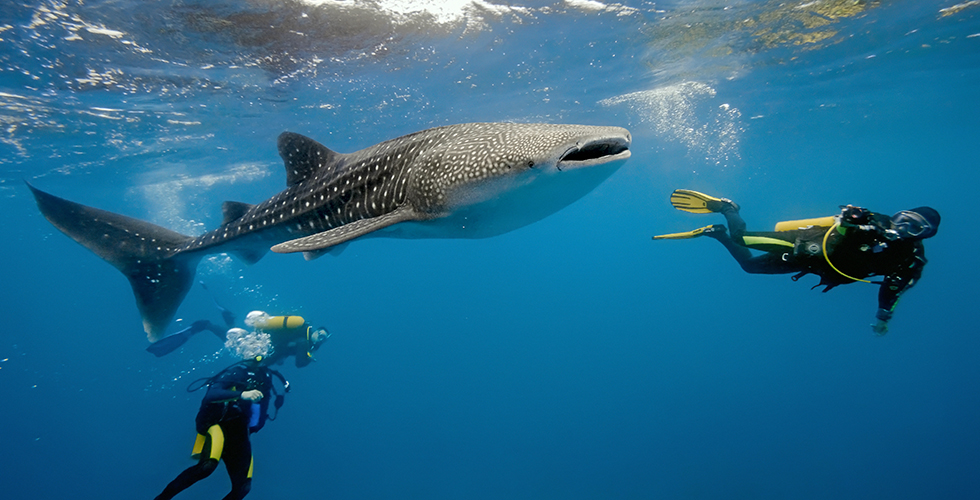 In the last few years, the focus on whale sharks has increased a lot. Many people have fallen in love with these amazing creatures. Sadly these sharks are recently reclassified from ‘threatened’ to ‘endangered’ by the IUCN, meaning their populations have decreased globally by over 50% in the last few years.

Therefore whale shark enthusiasts have decided to join forces and create projects and associations to study and save the whale sharks. Diviac wants to help these groups! 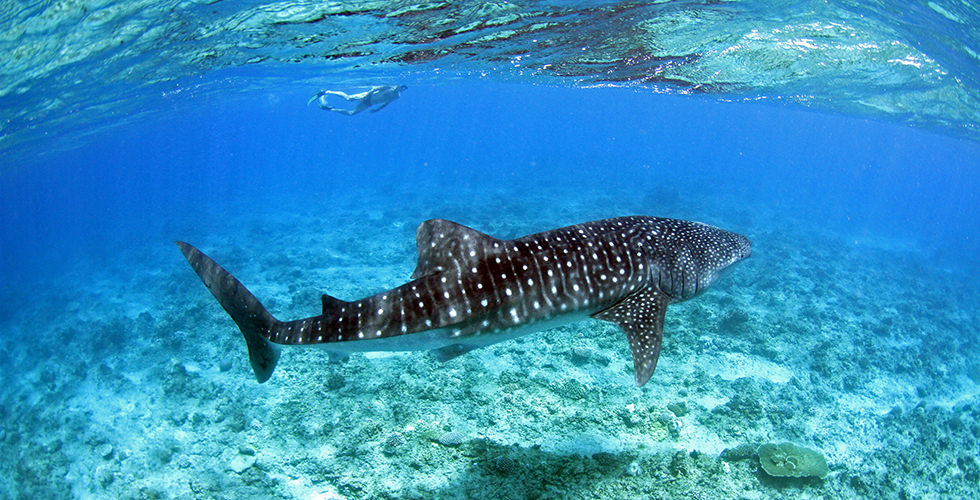 Can You Swim With a Whale Shark?

Is it Safe to Swim or Dive With a Whale Shark?

Of course! These huge animals are not dangerous. Whale sharks have never attacked humans. On the contrary, we are a potential danger to them. I strongly recommend following the code of conduct in order to interact respectfully with whale sharks.

How Long do they Live?

It’s still not confirmed, but probably up to 100 years.

How Much can they Eat?

Whale sharks are filter machines. They can filter more than 600,000 liters (600m3/ hour) of water in 1 hour, absorbing the plankton contained inside, which equals around 2-3kg.

Do Whale Sharks Have Teeth?

They have about 300 rows of small teeth a few millimeters long, but they do not use to feed on anymore (relax, they are not dangerous!). These teeth are like a rasp, and their latin name ‘Rhincodon typus’ actually means ‘rasp tooth’. 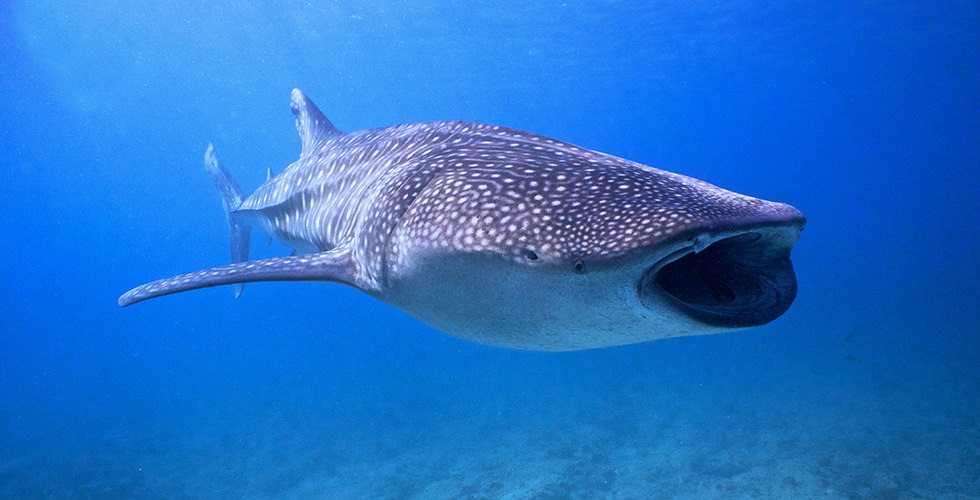 We often talk about plankton, but do you know exactly what it is? Plankton is made up of a huge number of animals and plants (generally very small) which can not oppose sea currents although some have an ability to actively swim (e.g. jellyfish).

We can distinguish two categories of plankton:

It is amazing to discover that majestic animals and giants such as whale sharks, blue whales and manta rays feed exclusively on small creatures such as copepods and krill! 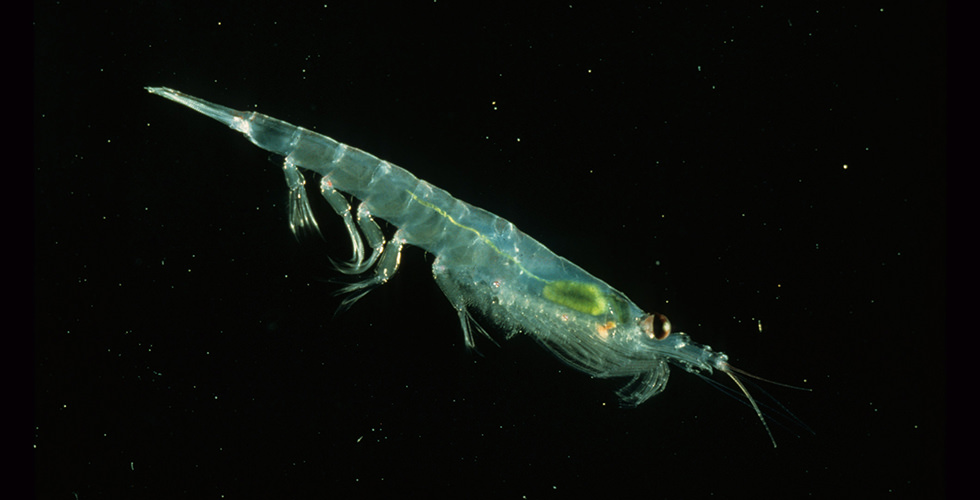