Divers, snorkelers and land lubbers all enjoy seeing sea turtles. Yet, these reptiles represent some of the most threatened marine species. For that reason, it’s important to spread crucial information to a wide population of people who can make a difference for these turtles. For it’s only with love, knowledge and action that these animals can be saved.

The olive ridley sea turtle is currently listed as vulnerable. Still, as one of the seven species of sea turtles, the olive ridley deserves attention. Plus, it’s an awesome little turtle with some quirky habits.

Did you know that in November 2017 around 530,000 female olive ridley sea turtles came ashore at Playa Ostional in Costa Rica to lay their eggs? This massive nesting event is called “arribada,” and it happens every year in different parts of the world.

Keep reading to learn more about these splendid marine creatures.

The olive ridley sea turtle is, after Kemp’s ridley turtle, the smallest of the sea turtles, reaching a maximum length of only 30 inches (78 cm) and a weight of 105 lbs (48 kg).

The rounded carapace is dark in color and varies from gray to a greenish olive color, while the plastron is white. Despite having many features in common with Kemp’s ridley turtle, the two species shouldn’t be confused with one another as they live in different areas. 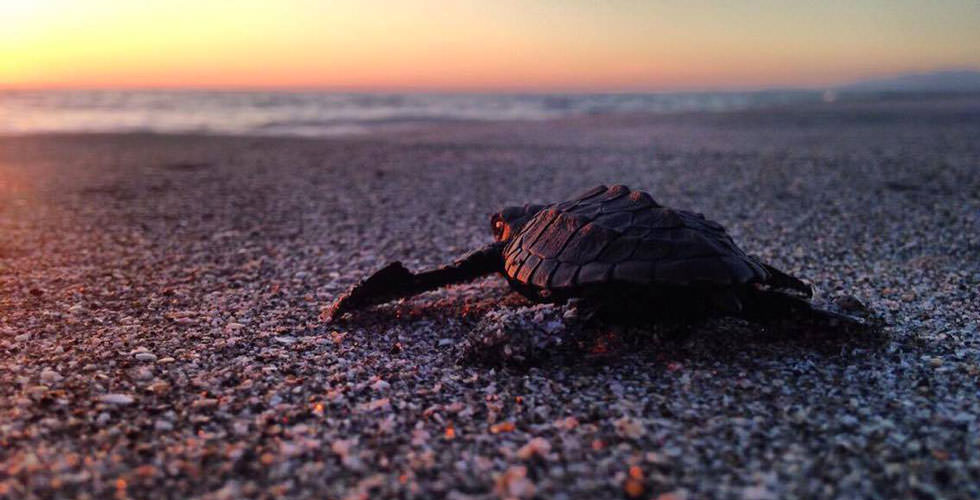 Where can I go diving and swimming with olive ridley sea turtles?

For this question, we have created a list of the 10 best places for diving and swimming with sea turtles!

How many olive ridley sea turtles are still alive?

The number of nesting females is estimated to be 800,000 individuals.

Mating takes place in the water through internal fertilization near the nesting site. Very often, females return to lay their eggs on the same beach where they were born. They reach sexual maturity quite early, probably between 7 and 16 years.

How many eggs do olive ridley sea turtles deposit into one nest?

The females of this species synchronize their exit from the water to the nesting beach. This means all the females nest at the same time, and each female lays an average of 110 eggs, which hatch after 46 to 65 days.

It’s a massive nesting event during which thousands of females gather at the nesting areas to lay their eggs. It can last several nights and can occur in India, Nicaragua, Costa Rica, Panama or Mexico. How all of the female olive ridley sea turtles synchronize this process is still unknown.

How are sea turtles able to lay their eggs on the same beach on which they were born?

Scientists are still unsure how this is possible, but it is probably a mix of factors, including physical landmarks, marine currents, chemical odors and the presence of magnetite ore in their skull. This element would allow sea turtles to orient themselves according to Earth's magnetic field.

How can I see an olive ridley sea turtle nesting or the babies heading to the ocean?

You have to go through serious, eco-friendly operators. Check out our top 10 list for more info.

Fortunately, there are associations that work to save these animals through research, education, training and habitat protection.