Humpback whales (Megaptera novaeangliae) are among the most beautiful and friendly whales on our planet. There are many places to encounter these gentle giants, and the opportunity to swim with them is quite common.

Their scientific name, "Megaptera", refers to their large pectoral fins, which are in fact the largest limbs of any creature in nature. They were first given the second part of their name in New England. One of the most impressive features of humpback whales is that they “sing" underwater, emitting sounds that are thought to serve as communication with other individuals. It’s now understood that by making these noises, the whales are trying to find a mate for reproduction or mark their territory.

Humpback whales are migratory animals. During the polar summer, they feed on plankton and small fish, but when the temperatures begin to decrease, they move to tropical seas to mate and breed.

Humpback whales are the only baleen whales that jump completely out of the water (breaching). They also show a repertoire of at least 15 different surface behaviors, giving them the title of the most acrobatic whale.

The following are the world’s best places to watch humpback whales in their natural habitat.

This marine park was created to protect and support the more than 1,600 marine species living there, including a resident population of beluga whales. There are 13 species of whales that visit the Marine Park in order to feed and build their energy reserves for the long migrations ahead. Excursions can be made using big vessels, small rubber boats or even kayaks. As always, it’s important to maintain the required distance (650 feet [200 meters] from humpback whales) in order to avoid disturbing them.

Whale watching tours start every day (weather permitting) at 9:00, 13:00 and 17:00. The excursions take approximately 3 to 3.5 hours. During this time operators look for a variety of whales, from minke and humpback whales to white-beaked dolphins, orcas and harbor porpoises. Tours run all year round, but the high season is between May and August.

The Sea of Cortez is one of the most beautiful seas in the world. In fact, it’s known as the aquarium of Mexico because of the large biodiversity found within its confines. Between December and April, whales gather here to give birth and breed. Local guides will accompany you on small boats, but you only need to travel a few hundred meters from the coast to be joined by many whales. This creates an unforgettable, half-day whale tour.

The third largest bay in Mexico, Bahia de Banderas is surrounded by beautiful mountains known as the Sierra Madre del Sur. It provides the perfect habitat for different marine mammals, and humpback whales use these tropical waters from December to April to mate and breed. Whales can be seen breaching from shore, but to have the best experience, just hop on a small boat with a marine biologist on board. You’ll be able to get a lot closer to the whales, an experience you’ll never forget.

The Pacific coast of Colombia is an ideal place to spot humpback whales, because both the southern and northern population visit these tropical waters where they give birth and breed. Whales can be seen right from the beach or local guides will bring you closer using small boats. We suggest looking for them in Nuquí, Bahia Malaga, Buenaventura, Tumaco and Gorgona National Natural Park.

Although there is not a best time for whale watching, tours start here in the morning and last two hours on average. In South Africa, boats are allowed to approach the whales up to 165 feet (50 meters). Then the cetacean can decide to get close to the boat or disappear into the deep sea. A local expert guide will explain the various behaviors displayed by the whales in order to help you appreciate every movement of these marine giants.

Kaikoura is a town on the east coast of the South Island of New Zealand, a fascinating land where the mountains meet the sea. Tours last about 3 hours and use modern catamarans equipped with engines that minimize underwater noise. The most common species found near Kaikoura is the sperm whale as well as groups of dolphins, but humpback whales can be seen during their migration.

The cold waters of Greenland are home to 15 species of whales, including narwhals, beluga and bowhead whales. You can spot these during the winter, but in the summer, humpback whales, minke whales and fin whales are most commonly seen. Whale watching trips generally last four hours, and the captains of the boats are always in touch with local fishermen who help them to find the whales.

Humpback whales start to arrive in these crystal clear waters in December, but peak numbers occur in mid-January. You can see them right from the beach, a few miles away, but of course we recommend participating in an excursion with experts. In the span of a couple of hours, you’ll be able to approach these whales as close as 100 yards (90 meters) legally. Preferred tours depart in the morning, because at this time, it is less windy. In Maui, it’s possible to go whale watching by boat, kayak, outrigger canoe or stand-up paddleboard.

Humpback whales are seen in two seasons: whales from the Northern Hemisphere are seen from December to March while those from the Southern Hemisphere are seen from early July to late October. Tours in the area take 4 hours. It’s also recommended to visit the Marino Ballena National Park, Isla Ballena (Whale Island), Las Rocas Tres Hermanas (Three Sisters Rocks), Cavernas Ventanas (Windows Caves) and the Tómbolo of Punta Uvita, giving you the opportunity to see dolphins and a seabird sanctuary.

Tours from Glacier Bay are organized twice a day, in the morning and early afternoon. They last about 3-4 hours. Humpback whales arrive from the warmer waters of Hawaii, where they spent several months without eating. However, Alaska's cold waters are rich in food, and these whales spend their time here accumulating fat for their next migration.

Humpback whales stop annually in these Australian waters, because Hervey Bay is along their migration route to Antarctica. Here they can grow their young in the absence of predators. There are many boats offering whale watching tours, which last an average of four hours. As a special treat, the vessels are often equipped with a hydrophone for listening to the songs of whales.

The Best Places for Swimming with Humpback Whales

The following are the best places to swim with humpback whales.

The humpback whale tour includes 6 days on this marvelous Polynesian island. Every day starts in the morning around 9 am, looking for humpback whales in their breeding and nursery areas. A naturalist will assess whether you can swim with these amazing cetaceans, and to avoid disturbing them, there will be a maximum of 4 guests plus a local guide in the water at a time. The boats return to Tonga in the early afternoon.

Silver Bank is a submerged bank in the Atlantic Ocean which attracts a very large number of humpback whales. It is estimated that between 5,000 and 7,000 whales visit the area to give birth and breed. The only way to enjoy the place and these cetaceans is to spend a week on a liveaboard vessel and to use small rubber boats to get close to the whales. Silver Bank is one of the few places in the world where it is possible to snorkel with these whales. It will be an unforgettable experience.

Humpback whales migrate to these waters to give birth and reproduce then return to Antarctica. In addition to observing them from the boat, you are allowed to swim with the whales. In the water, you can take amazing photos and videos. In accordance with the code of conduct, the maximum number of tourists that can enter the water at one time is 4 in order to avoid disturbing the whales. Furthermore, the excursion must be guided by experts. 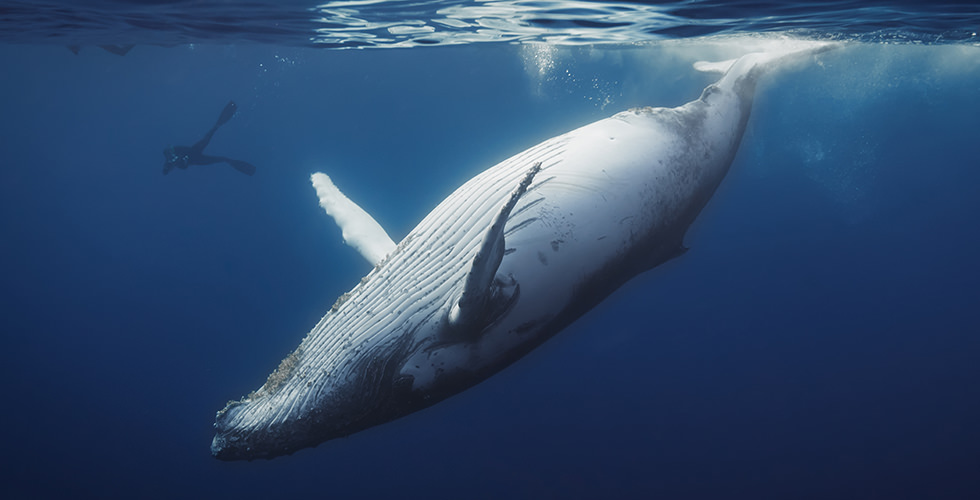 The Best Places for Scuba Diving with Whales

Diving is generally not allowed with whales as the bubbles produced can be interpreted by these cetaceans as a sign of aggression or danger. They can emit bubbles as well from their blowhole. This regulation also serves to limit the disturbance of the whales in their nursing areas. 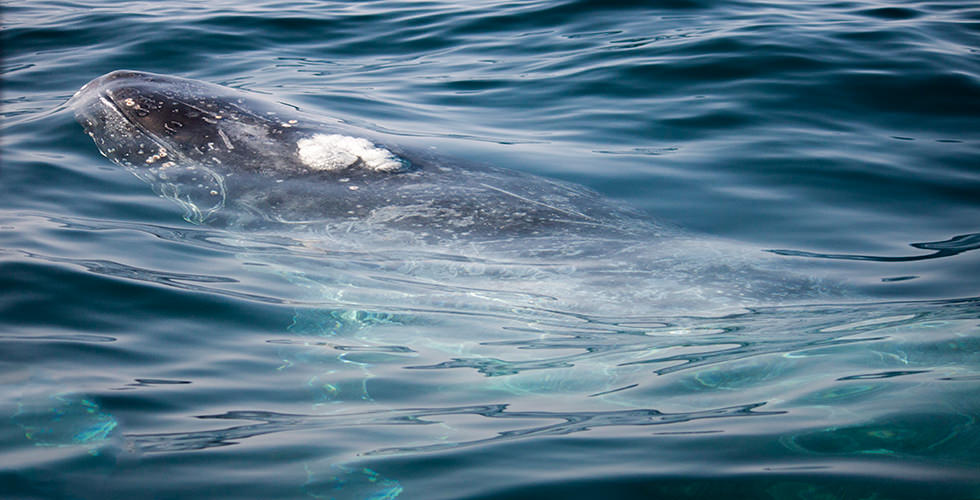 We always recommend following the code of conduct while enjoying humpback whale encounters. It’s the best way to respect these gentle giants. We suggest verifying the company that provides the whale tours is registered and has a permit to do so. It’s best to use eco-friendly companies. This will insure you have the best possible experience knowing that the whales and environment are respected. 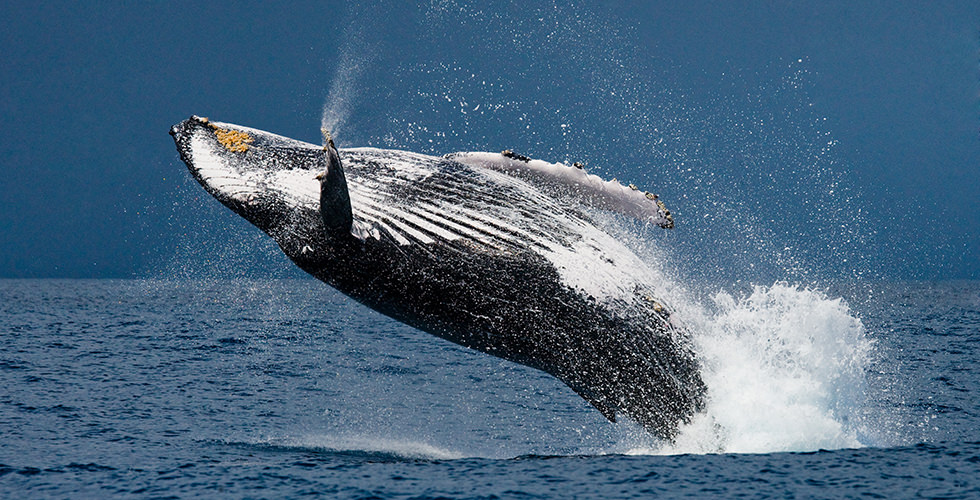 How Big is a Humpback Whale?

How Much Do Humpback Whales Weigh?

They can reach a maximum weight of 40 tons (36,000kg). The females are usually heavier than the males.

How Long is the Gestation Period of Humpback Whales?

How Much Does a Baby Humpback Whale Weigh at Birth?

How Long Do Humpback Whales Live?

Their lifespan is around 50 to 80 years.

What Do Humpback Whales Eat?

These whales can eat up to 2 tons (1800kg) of plankton and small fish (like herring) per day.

How Often Do Humpback Whales Need to Eat?

Normally whales feed in abundance in the cold waters near the poles. Their feeding method is very impressive, called “net bubbling.” Using this technique, different whales create a bubble net to entrap fish inside and then come up with their mouths wide open. During winter, when they reach warm tropical waters for the mating period, humpback whales generally do not feed. They survive thanks to the fat accumulated during their stay in cold waters.

How Many Humpback Whales Are Left in the World Today?

Actually, there are more than 60,000 humpback whales currently living in our oceans.

Are Humpback Whales an Endangered Species?

No, their status is “LC” (Least Concern), and their population is increasing.

How Fast Can Humpback Whales Swim?

What Sounds Do Humpback Whales Produce?

Listen to the humpback whale song here. Only males sing; however females can also communicate by sound. For example, communication between a mother and her calf is very strong. They can recognize each other by sound.

Where Can You Find Humpback Whales?

Humpback whales inhabit all the oceans. Take a look at their distribution on the Home Range Map.

This article was written by Mario Passoni, a marine biologist involved in several projects concerning ocean conservation and education. Special thanks to Wayne Sentman from the Oceanic Society and Thalia Martinez.