Wreck Diving: The 10 Best Dive Sites in the World

Since the scuba diving industry was born, people have been fascinated by shipwrecks. Whether it was finding new wrecks, salvaging old ones or treasure hunting, many of the most important advances in scuba diving were motivated by wreck diving. Today, there is a wreck for every ability level, from Open Water to Trimix diver. Although this tends to be a highly controversial issue, we believe these 10 wreck diving sites represent the best in the world. (Feel free to disagree with us in the comments below!)

Congratulations, you’ve been to 1 out of 10 of the best wreck dive sites in the world. Share it with your friends and let’s see how you compare! 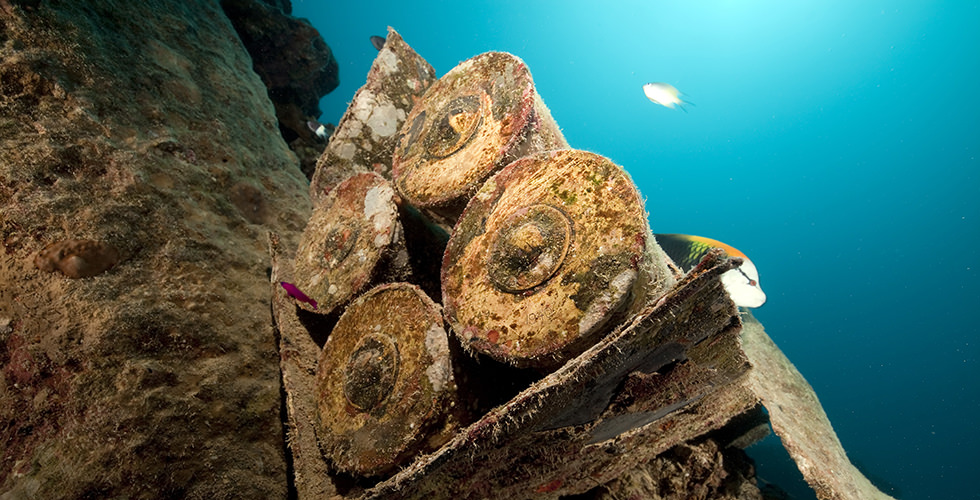 Located in the northern section of Red Sea, the SS Thistlegorm is known to many as the best wreck dive in the world. A popular liveaboard stop, it’s accessible by both dive safari and day trips from Sharm El-Sheikh. This 420-foot (128-meter) British transport ship was sunk in 1941 following a German air attack. At advanced recreational depths, the Thistlegorm is a fantastic glimpse into history. Divers can still view the ship’s cargo, including tanks, trucks, jeeps, motorcycles and even a locomotive! You’ll need at least two dives to fully see everything the Thistlegorm has to offer.

Considered one of the most accessible wrecks in the world, the top of the USAT Liberty sits in just 10 feet (3 meters) of water, making this wreck perfect for snorkeling, too. The ship was originally an American warship. It survived WWI only to be sent into WWII. In 1942, it was torpedoed by the Japanese off the coast of Bali. The captain beached the ship, and it sat rusting above the water for 30 years. In 1963, a volcanic eruption shifted the ship into the shallow waters just offshore. The deepest section of the boat lies at 95 feet (28 meters) and measures 390 feet (120 meters) long. Advanced divers can complete a few swim throughs, but open water divers are welcome to explore the shallower sections. The USAT Liberty overall makes a great introduction to wreck diving!

Originally built as a luxury cruise liner, the SS President Coolidge became a troopship during World War II. In 1942, she was struck by friendly mines after the captain failed to receive information about a safe passage to harbor. The ship was grounded and all but two of the sailors aboard survived. Today, the ship sits between 65 and 230 feet (20 and 70 meters) and is a nationally protected dive site. Scuba divers can explore the various decks and holds, finding guns, cannons, trucks and “The Lady,” one of the remnants of the ship’s former glory.

During World War II, the natural harbor known as Chuuk (Truk) Lagoon was the main base of the Japanese navy. As might be expected, this concentration of ships became a target for Allied forces who bombed the lagoon in 1944. This operation ultimately sunk 12 warships, 32 merchant ships and 275 aircraft. Today, the Fujikawa Maru is one of the most accessible of the 60 “re-discovered” wrecks. The ferry sits in just 30 feet (9 meters) of water and is easily penetrable. Inside, divers can spot everything from airplanes to ammunitions.

With easily accessible wrecks like the Hilma Hooker, wreck diving doesn’t get much better than it is in Bonaire. This 236-foot (72-meter) freighter sits on her starboard side under 95 feet (28 meters) of water. Her history is an interesting one. In 1984, the ship and her crew were detained for drug smuggling. The owners of the boat never came forward, so the Hilma Hooker languished and eventually sank at an anchorage. Thankfully it landed on a sand flat between two coral reef systems. Very little penetration is possible, but with crystal clear visibility, the Hilma Hooker is a dive to remember.

Occasionally treacherous conditions make the Great Lakes a sailor’s nightmare and a wreck diver’s dream. The depths of the Lakes mean that many of the wrecks will never be visited, but those that have been discovered generally remain in pristine condition due to the cold and fresh water.

The Gunilda was a luxury steam yacht billed as the most opulent boat at the turn of the 20th Century. In 1911, she ran aground on McGarvey’s Shoal, which reaches up from 280 feet (85 meters) to within 3 feet (1 meter) of the surface. The passengers abandoned ship and salvage efforts began, but the hull filled with water and she sank to 270 feet (82 meters). Today, the wreck remains perfectly intact and as scenic as the day she sank, but only tec and trimix divers are able to behold her beauty.

Arguably the top wreck dive in the Southern Hemisphere, the SS Yongala was sunk during a cyclone in 1911, killing all 124 on board. Today, the freight and passenger steamer’s highest point lies at just 52 feet (16 metres) and goes down to 108 feet (33 metres). To maintain the remarkably good condition of the hull, divers are prevented from entering the boat. This serves to reduce the negative effects air bubbles have on the sunken ship.

At the end of World War I, 74 German vessels were scuttled off the Orkney Islands in Scotland. This action was taken in order to prevent the ships from falling into the hands of the British. After salvaging efforts between 1920 and 1945, 7 of the German ships remain in Scapa Flow. These battleships join British naval vessels and block ships to create a wreck diving wonderland.

While many of these wrecks lie below recreational limits, the SMS Kronprinz Wilhelm is easily accessible at 40 to 115 feet (12 to 35 meters). The size of the 480-foot (146-meter) can be appreciated at a shallow depth, but the ship’s armaments are better enjoyed from advanced depths with the use of Nitrox.

The only ship in the top 10 to have been sunk twice. In 1944, before completion, the boat was torpedoed in tow. It was subsequently raised, renamed and finally completed 2 years later. After 12 years of varying success as a passenger cruise liner, the Bianca C finally met her end when, anchored just of the coast of Grenada, she caught fire. Of the 673 people on board only 2 died.

Today, this impressive 590-foot (180-meter) wreck sits at 100 to 164 feet (30 to 50 meters), lying between a reef system and the open ocean. So you get both reef and pelagic action in an already fantastic dive. Dives usually include a visit to the swimming pool (38m) and work along the bow, finishing at the bow tip (30m).

Initially constructed as a class heavy cruiser, the USS Saratoga (CV3) was converted into an aircraft carrier and eventually commissioned for duty in 1927. After several years of service before and during WWII, the 880-foot (268-meter) carrier found itself surplus to requirements at the war’s end. At this point, the Saratoga was assigned to Operation Crossroads, a program to assess the effect of atomic bombs on naval vessels.

After surviving her first exposure to atomic firepower, the USS Saratoga would eventually sink under the impact of the second test. It came to rest on the sand 177 feet (54 meters) down with its bridge at 18m. Today, much of the wreck still remains unexplored. Because the Bikini Atoll remains uninhabited, the marine life in the area is also astounding, and the Saratoga has become home to an overwhelming number of marine species.

While wreck diving can lead to memorable experiences, there are some further considerations to make before your first expedition. 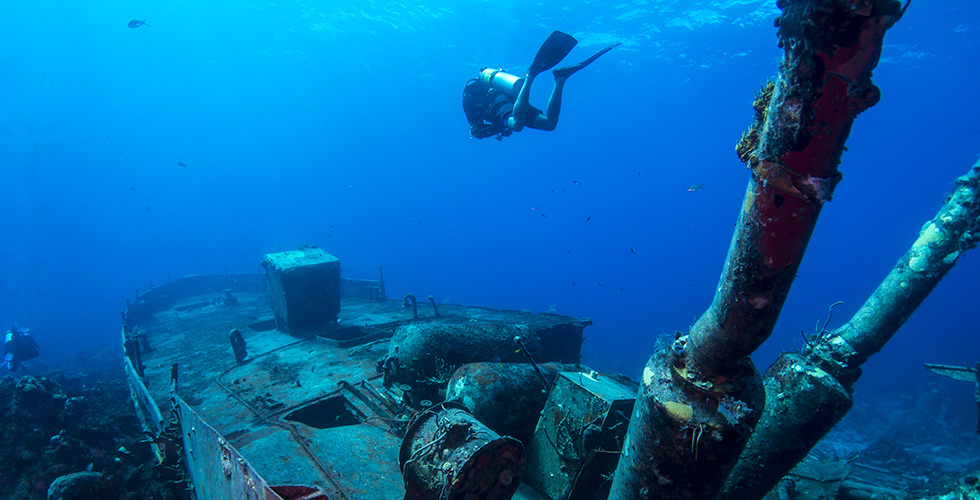 What Equipment Is Necessary For Wreck Diving?

Because wreck penetration often includes overhead environments, special equipment may be necessary. While the gear needed will change based on the situation, serious wreck divers might want to consider investing in the following items: 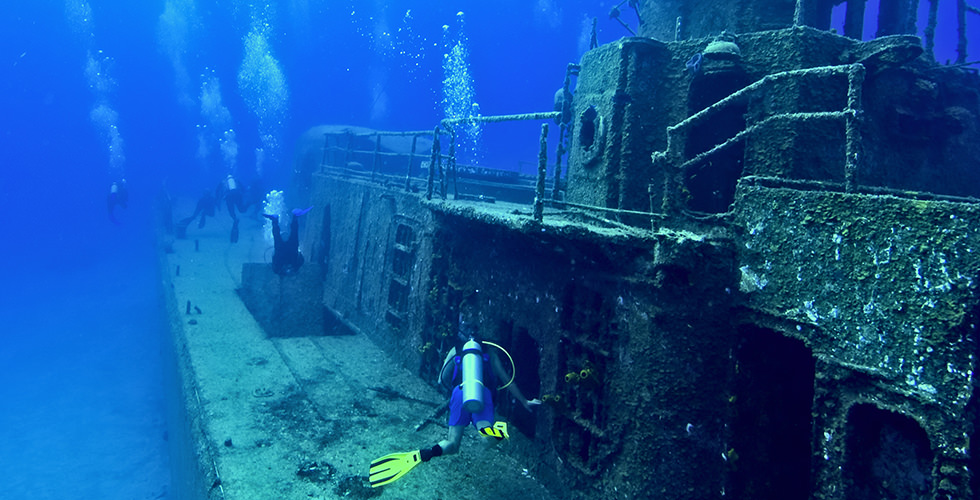 Do I Need To Take A Wreck Diver Specialty Course?

Wreck diving and its certification levels can generally be split into three categories:

Like any type of diving, wreck diving carries inherent risks, but with proper training, these dangers can be minimized.

The most common risk in wreck diving is entanglement. This can occur in non-penetration wreck diving as fishermen’s nets and lines often become ensnared on ship structures. A reliable dive knife can go a long way in solving this issue.

Another risk to consider is a silt-out. In a limited penetration situation, a silt-out can become endangering if the nearby exit is blocked from view. Limited visibility causes confusion and often divers will progress further into the wreck accidently. For this reason, excellent buoyancy is essential to wreck diving.

Finally, in a full penetration situation, many dangers are present. Past the light zone, a multiple light failure or a disruption in air supply can prevent a safe exit of the wreck. For this reason, only fully trained wreck divers should venture so far into a sunken ship.

How many of these wrecks have you visited? Check them off and then let your friends know by sharing your bucket list on Facebook or Twitter.